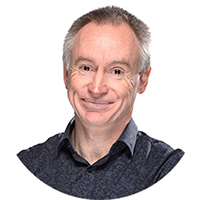 Associate Professor Michael Barlow is the Acting Head of School of the School of Engineering and IT and has been with UNSW Canberra for 25 years. Professor Barlow was previously the Deputy Head of School for People and held a range of other leadership roles since 2006.

Professor Barlow has a strong STEM background in computer science, mathematics and engineering and has written 22 Journal Articles, 10 Book Chapters and 106 Conference Publications, as well as winning some $3M in competitive funding, over the course of his academic career.