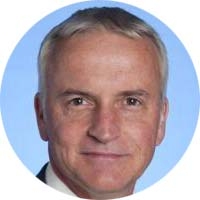 Professor Warrick Lawson is the Associate Dean (Research) and the Head of the School of Science at UNSW Canberra at ADFA.

Prof Lawson is an astrophysicist with significant expertise in star formation, young stellar populations and stellar evolution. His research highlights include pioneering X-ray/optical/IR studies of young stellar systems, as well as the discovery of two of the nearest young star clusters to Earth and the subsequent study of their stellar populations. The eta Cha and epsilon Cha clusters (named after their brightest stars) are 5- to 8-million-year-old systems located 300–350 light years distance from Earth. The eta Cha cluster is remarkable for being the fourth nearest star cluster to Earth and the nearest star cluster discovered in over a century. No younger stellar population lies closer to Earth. Neither of these clusters would have been discovered without X-ray observations made from satellite observatories. This is because X-ray selection is the only efficient method for selectively identifying magnetically-active young stars from far more numerous foreground and background, as well as unrelated field stars.

Prof Lawson has coordinated extensive observing campaigns to study these clusters and has published more than 20 journal papers on these two groups, as well as more than 10 papers on other nearby star formation regions.

Prof Lawson has been successful in achieving access to leading astronomical facilities, which is a highly competitive process and subject to rigorous peer and technical review.

His research takes a deliberate multi-wavelength approach in order to study these objects across a wide regime of energies, and to investigate different physical processes. He utilises state-of-the-art astronomical facilities ranging from X-ray space observatories such Chandra, leading ground-based optical, infrared and radio telescopes, and infrared space observatories such as Spitzer and Herschel.

The central question underlying Prof Lawson's research concerns the timescale for the evolution of young solar analogues including the timescales and conditions conducive to planet formation, with comparison to the contemporary Sun. He achieves this by studying stellar populations of different ages, particularly those less than 10 million years old where circumstellar, planet-forming disks remain prevalent. He probes science ranging from magnetic activity in young stars, to fundamental stellar properties such as mass, temperature, age and composition, and the frequency and properties of planet-forming circumstellar disks.

Prof Lawson has enjoyed considerable success at being awarded access to leading astronomical facilities, which is a highly competitive process and subject to rigorous peer and technical review.