Can we save schools and hospitals from military strikes using QR codes?

We’ve become very familiar with QR or ‘Quick Response’ codes throughout the COVID-19 pandemic: chances are you might have used one to check-in to your favourite cafe, workplace, or businesses.

However, UNSW Canberra researchers Dr Manabrata Guha and Dr Jai Galliott believe these small but powerful barcodes also have the power to hold military operations accountable for strikes against sites of humanitarian importance.

In recent scoping research, Dr Guha and Dr Galliott suggest that affixing or incorporating QR codes into a building’s structural design could provide information about such sites to manned and unmanned armed combat systems.

In turn, this information could prevent combat systems from firing at places that nations want to protect.

The United Nations currently employs a mechanism called ‘deconfliction’, which aims to prevent attacks on locations of humanitarian importance of ‘protected sites’ – it has been used widely including recently in Syria, however mounting evidence indicates that it is not effectively protecting these sites.

The mechanism includes a ‘no-strike list’, which contains the locations of sites of humanitarian importance around the world.

Unfortunately, belligerents in war have been using the no-strike list to specifically locate and attack such sites.

While Dr Guha is an avid science fiction fan, and his work often involves speculating on emergent technologies and of their application, he contended that “I like the idea of trying to speculate, but when we are dealing with weapons systems, I like our feet to be grounded”.

He and Dr Galliott thought that there might be a better solution to the UN’s deconfliction mechanism by improving on ideas about ethical autonomous weapons that are currently subject to debate. Equally, as Dr Guha put it, “it is [also] true, however, that we were attempting to avoid incorporating overly complex technologies”.

In Dr Guha’s and Galliott’s proposed system, when combat systems (which are now increasingly enabled by sophisticated artificial intelligence) scan the battlespace using their existing sensors, they will also scan the QR codes.

The code will reveal the location and identity of the site within striking range, which will then be compared to an on-board database containing a no-strike list. If the code represents a protected site, the information will lock the combat system’s firing mechanism to protect the site.

This system would also provide real-time updates to active and operational battle maps, which would contribute to enhancing situational awareness and promoting collective engagement capabilities for the combat units – manned and unmanned – within an active battlespace.

The proposed system could be fine-tuned to account for blast effects to prevent collateral damage to attacks launched on legitimate targets, which may be in the vicinity of sites of humanitarian importance.

If an actor was able to hack and disable the strike lock and attack a protected site, a blockchain-encoded record could also aid in holding such an offending actor accountable for a breaching the internationally accepted rules of engagement and laws of war.

Dr Guha said when his research partner, Dr Galliott, suggested the use of QR codes in the military context, he was sceptical.

“My own experience with QR codes until then was with COVID-19; I didn’t know they could be scaled up,” Dr Guha explained.

“But when I looked into it, I found that they could indeed be used. I suggested that integrating blockchain technology to this to create immutable records of actions could also help with the question regarding accountability of actions in combat.”

Eliminating the need for large-scale changes to existing military equipment and avoiding the use of complex and in most cases, still developing, AI-powered systems in active military combat conditions gives weight to this deconfliction alternative.

This solution leverages nation states’ obligations to uphold the law of war and thus evades the thorny issues of ethics and values that often dominate discussions surrounding autonomous weapon systems.

“We were also mindful of military-operational realities and exercised care to ensure that our proposed solution does not negatively impact the combat capabilities of the system,” Dr Guha said.

Beyond Dr Guha and Dr Galliott’s research, some examples in the world today of ways that such codes have been affixed or displayed include having them painted on to roofs, and using drones to form QR code patterns in the sky in regions that cities would like to protect. 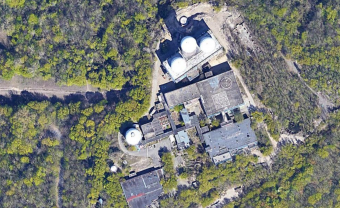 An aerial image of an artificial hill at Teufelsberg, Berlin. An ex-listening station, the building structure is now a gallery with a QR code painted on top. (Credit: Google Maps)

Examples also exist of brickwork and concrete design where a QR code pattern has been engineered within the structure of a building. 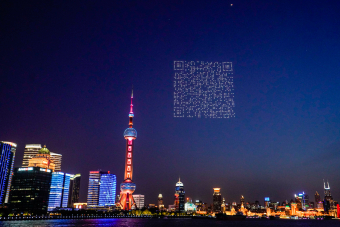 A QR code is formed by illuminated drones in the sky in Shanghai, China. (Credit: Bilibili)

Dr Guha and Dr Galliott look forward to following further work on the storage capacity of QR codes as well as practical applications of this potential solution.

A detailed representation of the proposed system can be found here.