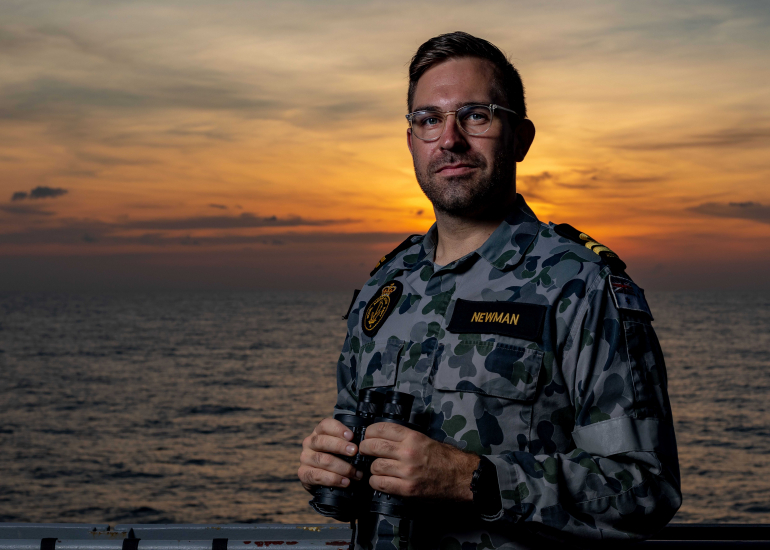 UNSW Canberra alumnus Lieutenant Matthew Newman is the recipient of a John Monash Scholarship, one of the most prestigious postgraduate scholarship in Australia.

LEUT Newman is one of just 18 recipients of the 2022 scholarships.

The scholarship will allow him to complete a Master of Philosophy in International Relations at the University of Oxford where he will research how professional armed forces can cooperate on climate change to reduce the risk of environmental conflict.

“I look to previous scholars in awe of their contributions to Australian society and hope to replicate that in my own work. As part of the John Monash Scholar community, I am excited about the prospects of collaborative and inter-disciplinary work aimed at the big challenges our country will face over the coming decades.”

LEUT Newman, who is a Maritime Warfare Officer in the Royal Australian Navy, was fittingly named as the Zelman Cowen Scholar.

“He was not only Australia’s 19th Governor General, but he was a Naval Officer who completed his studies at the University of Oxford,” LEUT Newman said.

“His example of civic service and servant leadership will be front of mind as I embark on this exciting opportunity.”

LEUT Newman graduated from UNSW Canberra in 2018 with a Bachelor of Arts (International and Political Studies) and First Class Honours. He is the recipient of the RSL Sword for Service and the Jubilee Sword for exemplary performance as a military professional. 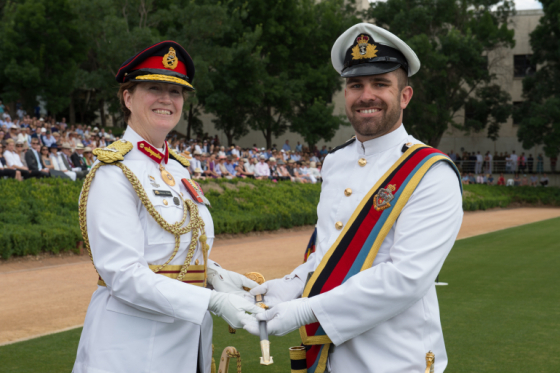 Since graduating, LEUT Newman has been deployed on a number of operations throughout the Indo-Pacific in Her Majesty’s Australian Ships Newcastle, Maitland and Ballarat.

“Over the past 12 months we have embedded within two US Carrier Strike Groups, enforced UN Sanctions against North Korea as part of Operation Argos and participated in a number of multinational exercises throughout the region,” he said.

LEUT Newman has also maintained a close relationship with UNSW Canberra where he grades undergraduate essays on topics relating to leadership studies and great power competition.

In 2019, he co-led a UNSW project focused on student wellbeing in the classroom. The project provided a number of recommendations to assist in supporting students at all stages of their academic journey.

This year, LEUT Newman was recognised as one of Out for Australia’s 30 Under Thirty LGBTI Leaders for his work supporting the inclusion of sexually and gender diverse personnel in the Australian Defence Force.

“Supporting sexually and gender diverse personnel has been a defining feature of my time in the ADF,” he said.

“I have been involved in creating a number of LGBTI networks at the unit-level and this has proven to be a valuable mechanism to mentor, support and socialise within a safe community.

“Through events such as the International Day Against Homophobia, Biphobia and Transphobia or Wear It Purple Day, we have been able to provide education on LGBTI issues to the broader ADF and show the value of inclusive and respectful organisational culture.”

Since completing his honours thesis, LEUT Newman has also remained engaged and passionate about the intersection of climate change and military operations.

As a John Monash scholar, he looks forward to being a voice for the topic of climate security and hopes to build a global network of military professionals who are dedicated to the task of reducing the threat posed by climate change.

“I believe climate change presents a significant challenge for military forces around the world as competition increases for scarce resources,” he said.

“Through my research I hope to better understand how military forces can prepare from a force structure, strategic policy and procurement perspective. Moreover, I want to think about how military cooperation has the potential to reduce the risk of climate related conflict.”

LEUT Newman said he looks forward to studying at a world-leading university alongside like-minded leaders.

“Never in my wildest dreams could I have imagined that I would one day be able to study at an institution such as the University of Oxford,” he said. “Without the financial assistance provided by the General Sir John Monash Foundation would I be able to do this and for their assistance I am extremely thankful.”